The sixth Platform Gallery exhibition is a collaboration between two lens-based artists with Ugandan roots. In keeping with the museum’s seasonal theme, Nourish, the exhibition features three large-scale photographs by Kibaate Aloysius Ssalongo and Ntare Guma Mbaho Mwine that highlight: the importance of kinship networks; the practice of caring for archives; and the role of studio and staged photography in the African Diaspora.

Kibaate Aloysius Ssalongo was born on August 24, 1939 in the village of Kitoma (within the parish of Naluzali in the Masaka district of Uganda) where he also died on November 25, 2006. Ntare Guma Mbaho Mwine is a Los Angeles based artist working in the mediums of photography, theatre, film, and television. Mwine had stewarded and collaborated with Kibaate and his photographic archive since 2001 after the two met in Uganda through a chance encounter.

Kibaate first took an interest in photography when his brother, Walakira Joseph, bought a Rolleiflex camera from an Indian merchant in Masaka. Between 1957 and 1964, Kibaate worked as a traveling photographer in the greater Masaka area including Iwengo, Sembabule, Rakai, Kyotera, Bukomansimbi, Kalungu, Kalangala, Lyantonde, Masaka, and his home base of Mbirizi. In 1964, two years after Uganda gained independence from British colonial rule, Kibaate opened his own studio and dark room in Mbirizi. Akwatempola. The name of the studio is derived from the Luganda proverb, “Akwata Empola Atuuka Wala,” which translates to, “The person who handles things slowly reaches far.”

During this same time, studio and street photography was gaining popularity in other parts of Africa that were also transitioning to independence. Sanlé Sory photographed automobile accidents as well as the club scene around Bobo-Dioulasso, Burkina Faso, where he founded the Volta Photo Studio in 1960, the same year Burkina Faso gained independence from French colonial rule. Malick Sidibe, award-winning photographer who opened his studio in 1962 two years after the Republic of Mali gained independence from French colonial rule, similarly documented sporting events, the beach, nightclubs, surprise parties, concerts, and studio scenes in and around Bamako, Mali. While all three photographers pictured different subjects and settings that span the elite to the everyday, the urban to the rural, they each offer a window into critical decades of sociopolitical change in East and West Africa.

Although Kibaate is no longer living, Mwine’s engagement with his legacy adds to and extends the studio photographer’s archive. In keeping with his promise to preserve and share Kibaate’s work far and wide, Mwine has recreated a selection of Kibaate’s photographs with some of the artist’s original subjects. In 2021, Mwine mounted the first ever exhibit of Kibaate’s work in the photographer’s hometown of Mbirizi titled Memories of Love Returned, an open-air exhibit at a local petrol station that featured over 5000 printed images of Kibaate’s photography along with some of Mwine’s recreations. Mwine is currently working on a documentary film on Kibaate’s decades-long practice, which Oscar winner Steven Soderbergh is Executive Producing. The Delaware Contemporary is the first east coast venue to exhibit Kibaate’s work. 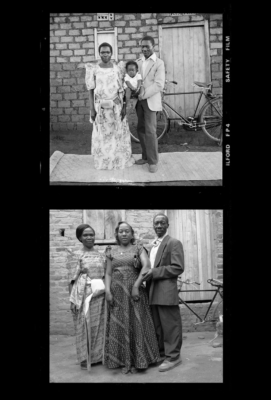 The Top 6 Places to Visit in Delaware